Intermediality of image and politics (2012) 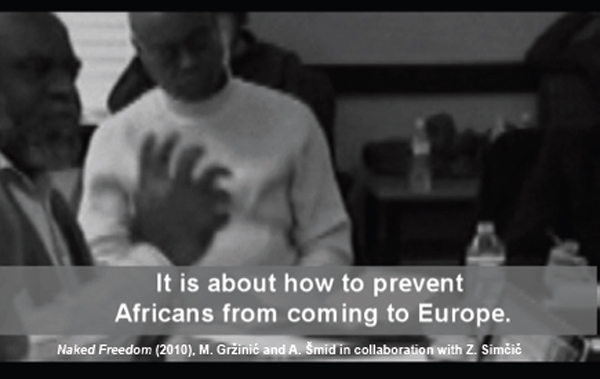 Marina Gržinić and Aina Šmid have been working with a critique of ideologies por- trayed as the fluid, changing systems, revealing their rhetorical functions in cul- tural production since 1982. Their collaborative practice points at resisting tactics; they evoke that emancipation and alternative voices in artistic practice can only emerge parallel with processes of reflecting upon who the ‘outsiders’ are in the context of post-Socialist mapping of non-capitalist world. Using the medium of video and cyber environment, the artists position memories of a Communist past and its symbolism with the contradictions of post-Socialist conditions, and in doing so engage in a critique of Western hegemony and global capitalism. Ideology is manifested in the body, history, and culture. The video Postsocialism + Retroavantgarda + IRWIN (1997) points towards aesthetics’ regime in which the video itself becomes a medium for a philosophical reflection about the cultural, artistic and political spaces in the current conditions of post-Socialism in the territories of the ex-Yugoslavia in the 1980s and 1990s. IRWIN group, Mladen Stilinović and Kasimir Malevich feature in the video. Their artistic projects with their relation to the Socialist and post-Socialist New Media Technology and Politics Gržinić and Šmid’s narrations of Europe ideology code in a specific way the ex- Yugoslavian geographical space.