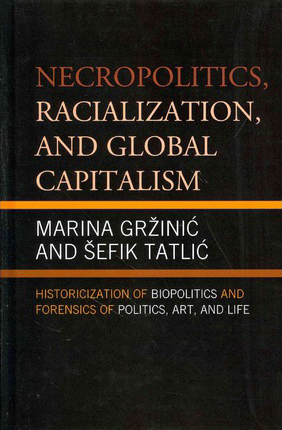 Necropolitics, Racialization, and Global Capitalism
Historicization of Biopolitics and Forensics of Politics, Art, and Life

by Marina Gržinić and Šefik Tatlić

“At the forefront of contemporary critical discourse we find a new category being formulated—the un-exploitable. They present us with the true nature of the regime under which we live—a regime which administrates death rather than life. This book in a unique collaboration between two authors, corresponding through its chapters, proposing together an invincible argument: everything has to be different. Grzinic and Tatlic make clear that the current necropolitical formation of Neoliberalism is not fate or destiny, nor is it a mistake or an accident. The authors insist on the political act of historicizing the modes of production, of life, of State, of politics, and of art, and analyzing the ways they are naturalized by current modes of capitalism. For those who might still believe that Fascism was defeated in Europe in the 1940s, this book makes clear—the fight is on.” — Joshua Simon, director and chief curator at Museums of Bat Yam, author of Neomaterialism

This book articulates a contemporary, globalized world as one in which radical disparities in distribution of wealth are being reproduced as the basis for depoliticized social, institutional, and ideological discourses. At its center is a reorientation of global capitalism from the management of life towards making a surplus value from death. This change is presented as a reorientation of biopolitics (bio meaning life) to necropolitics (necro meaning death). Therefore in the book we work with processes of change, of a historicization of biopolitics and its turn into necropolitics that leads to a theoretical trajectory from M. Foucault to A. Mbembe and beyond.

This book interprets the sustained perception of existence of dichotomy between these provisional extremes as a trademark of apolitical and/or post-political logics on which contemporary institutional, political, and social discourses tend to be structured upon. More, contrary to the majority of approaches that insists on a profound dichotomy between democracy and totalitarianism, between poverty and free market, and between democracy and capitalism, this book does not interpret these relations as dichotomous, but as mutually fulfilling.

The book elaborates, in the context of articulation of these logics, contemporary, imperial racism (racialization) as an ideology of capitalism and states that the First World’s monopoly on definition of modernity has its basis in contemporary reorganization of colonialism.

In the book, the authors trace a forensic methodology of global capitalism with which life, art, culture, economy, and the political are becoming part of a detailed system of scrutiny presented and framed in relation to criminal or civil law. Criminalization of each and every segment of our life is working hand in hand with a depoliticization of social conflicts and pacification of the relation between those who rules and those who are ruled. The outcome is a differentiation of every single concept that must from now bear the adjectives of the necropolitical or forensic; therefore we can talk about forensic images, art, projects, and necropolitical life, democracy, citizenship. This will change radically the perspectives of an emancipative project of politics (if it is any possible to be named as such) for the future.

Part I: MARINA GRŽINIĆ
01. The Darkest Sides of Europe and Global Capitalism
02. Biopolitics, Necropolitics, Unrestrained Financialization, and Fascisms
03. Southeastern Europe and the Question of Knowledge, Capital, and Power
04. Racialized dehumanization, the binary Occident/Orient in EU, and Decoloniality
05. A Refugee Protest Camp in Vienna and the European Union’s Processes of Racialization, Seclusion, and Discrimination
06. Elaborating on Transmigrant and Transfeminist Dissident Positions
07. Content, Form, and Repetition

Part II: ŠEFIK TATLIĆ
08. A Broad Overview of Basic Principles of Reorganization of Global Capitalism
09. The Hegemonic Capacity of a Gap between Politics and Ideology
10. The Function of Democracy in Normalization of the Hegemony
11. The Revival of Ideological Firmness – Racial State and the Formalization of Necropolitics
12. The Unending Transition – Colonialism as the Context of Organization of Exploitation Hierarchies in SE Europe
13. The Effect of the Depoliticization of the Distance between the Oppressor and the Oppressed
14. Substantialization of Depoliticized Ideology

Marina Gržinić is professor of philosophy and works as researcher advisor at the Institute of Philosophy at the ZRC SAZU (Scientific and Research Centre of the Slovenian Academy of Science and Art) in Ljubljana. She is also professor at the Academy of Fine Arts in Vienna.

Šefik Tatlić is a theoretician from Bosnia-Herzegovina, who is currently enrolled in the doctoral program in sociology at the University of Zagreb.